I grew up with the original Indiana Jones trilogy being some of the only VHS films that I had in my house. It was either Indiana Jones, The Fifth Element, or Alien. All of those films hold a spot near and dear to my heart, but I realized that I hadn’t seen Indiana since I was in sixth grade. I decided, with all three…or I guess four…films being added to Netflix, now was the time to re-watch and decide which one is my favorite. I’m starting from worst to best, and I’m assuming it won’t be hard to guess what my least favorite is… 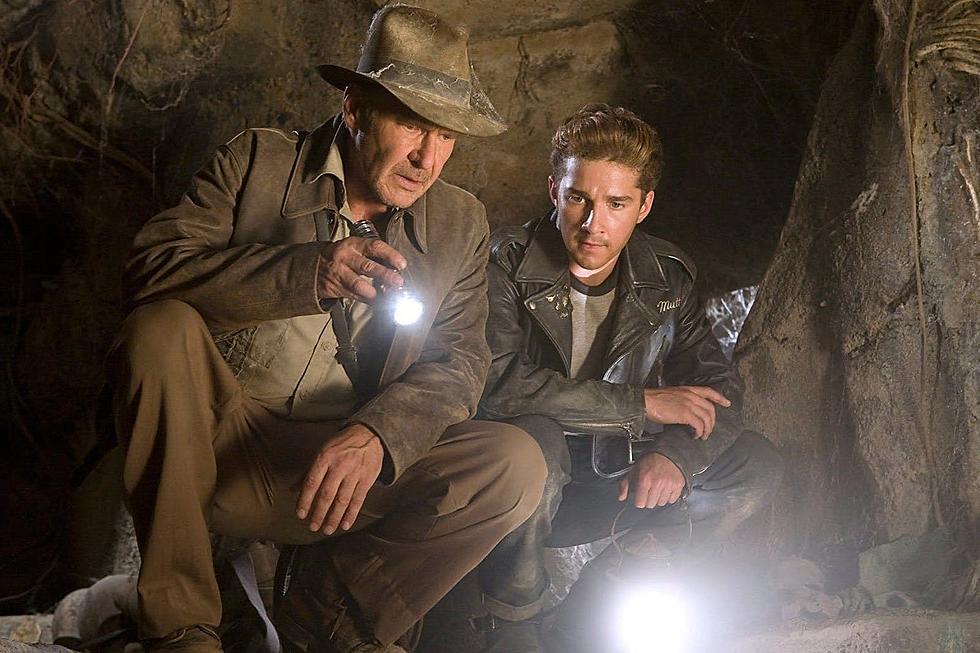 I saw this movie when it came out in theaters with my mom, and we were both so excited. I still remember the awkward silence when we were walking out of the theater, because we didn’t want to make each other feel bad if the other liked the movie. We got to my car and my mom just said “I think that was really dumb”. After watching it again, she is still correct. The acting in this movie is fine. When I saw the movie the first time, I remembered thinking that Cate Blanchett’s villian character was horrible, but I was fine with it the second time. Shia LeBeouf is also fine, and of course Harrison Ford doesn’t have to do too much convincing to be Professor Jones, but the writing is embarrassing. It’s written like aliens (ironic) watched the original films, and decided to try making one of their own, but completely didn’t understand what makes an adventure film fun  and exciting. Like I just picture Glorg (or whatever the alien’s name is) being like “Hey! Remember that pretty stick in the first movie? The humans will love to see that for 2 seconds. Oh! And don’t forget to make sure everything is lit with enough studio lights so the humans can tell that this is just a movie. And don’t forget to add a human swinging through a rain forest on vines, their primary mode of transportation!”

This is a bad film. I did think it was a little bit better the second time than the first time, but I felt so betrayed after seeing it the first time that it probably could never go down from there. Poorly directed and written, any actor can only do so much.

I get it. This is not a conventional spot for the original film from the series, but you have to understand: every movie in the original trilogy is great. Where I have this placed is based on my own nostalgia, and how entertained I was after my recent viewing.

The biggest praise that I want to give for Raiders is that the stunts are incredible. Stunts are something that I didn’t appreciate when I was younger, but as I’ve gotten older I love them more and more. Dragging behind a moving car, a fist fight dangerously close to a plane propeller, and of course the boulder scene. It actually makes me mad at how good these stunts look, because it just reminds me that movies now rely too much on CGI when there are such great stunt people out there. I do find the story for this one a little bit on the lame side. It’s a fun adventure to find the arc, but the arc itself just, like, makes you explode if you look at it? It’s a fun and campy scene, but also a little bit of a stretch.

Also, has there ever been a line that dads have quoted as much as:

“It’s not the years, honey, it’s the mileage”

Hear me out. This movie is unjustly criticized and deserves better. This is the wackiest, exciting, darkest Indiana movie for sure. Temple to Doom is the one that I watched the most growing up. I don’t know how many times my parents would ask me what I want for dessert, and I would say “chilled monkey brains”. The sets in this movie are easily the best, and being a horror fan, this film has a lot of things in it that haunted me for a long time. A dude’s whole roll is that he literally just rips people’s hearts out! What?! While I agree that Willie is annoying in this movie, her relationship with Indiana is perfect, and I love how as the audience we are getting annoyed at the same time. Harrison Ford is at his funniest too, and the scene where he almost gets strangled in his palace room and goes to search Willie’s room is hilarious. If you have been deterred from this movie by the bad reviews, I recommend giving it a try. It’s nuts, but also so fun.

I love this movie. It is the only movie I have ever seen with Sean Connery, and he is amazing in it. The relationship between Indiana and his father is the best character relationship among all of the movies, period. I think that the way they talk to each other can be really relatable for some people, and some of the best comedy comes from their banter. The best use of their chemistry is when they are on the Zeppelin, because that scene could be so boring, but watching a father and son argue about who a girl was hitting on makes the exposition bearable.

I am an escape room aficionado, and I think that makes me love the climax of Crusade more than any of the other films. I love how it ends up being a puzzle and a true test of worthiness. Stunts are also amazing in this film as well.